trip to 5986Narrenschiff asteroid
for Ensemble, Video and Audio - track, Dans
We have two kinds of madness. One comes from the hell, the other one has nothing in common with this, it comes from me and everyone wants it.
​Erasmus van Rotterdam 1509 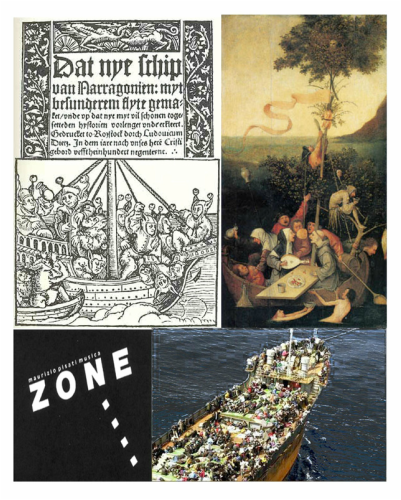 In Folia, the observer journeys along on an imaginary voyage aboard the Ship of Fools.


The Ship of Fools, a popular theme of medieval satirical art and literature, still evokes many associations. Innocent 'cartoons' from a distant past take us along the scenic route to the madness of contemporary reality. Refugees embark on the crossing to Europe by boat, inevitably resulting in dramatic consequences.
Past and present overlap in Folia's music as well. Resounding are bits and pieces of la Folia: originally a wild dance and one of the oldest themes in Europan music history. The ensemble of six, consisting of both historical and contemporary instruments, transforms into a 'prepared-hands ensemble' during virtuose and rhythmic cadenzas. The focus is shifted towards an 'instrumental theatre' of hands, fingers and objects.


Folia is an expedition through the imagination of the artist, the composer, the eccentric, the madman? It is an associative search for the mechanisms of the creative process. Images show eyes, hands and handwriting. We hear voices, different languages; sometimes unrecognizable. A palimpsest of sound, image, language and script that invites the observer to make associations or to simply be swept away by a searing dance.